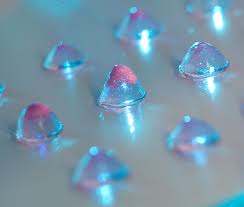 Everyone of a certain age remembers the pain of a doctor’s stripping off adhesive tape from a wound. Now a chemist, Professor Mark Grinstaff, Ph.D., his students and Harvard Medical School Assistant Professors of Orthopedic Surgery Edward K. Rodriguez, M.D. and Ara Nazarian, Dr.Sc. have developed a hydrogel that not only seals wounds but can then be dissolved and gently removed from the site of the injury.

As explained by writer Mark Dwortzan in BU Biomedical Engineering, the gel is intended for use with wounds that must be quickly closed to stem blood loss and prevent infection, but then later reopened for additional treatment. The developers of the gel say that their wound closure system is the first that will not only stop bleeding for several hours, adhere to the wound site, be easy to apply and also be simple to remove when other procedures are called for.

“Today’s trauma wound closure materials, once applied, must later be cut out,” said Grinstaff. “We’ve introduced a mild process for removing a hydrogel sealant from a wound where there’s no cutting or scraping involved.”

The idea for a wound-sealing reversible hydrogel emerged from a meeting Grinstaff had with Rodriguez and Nazarian. Grinstaff had long been interested in hydrogels and wanted to explore how the doctors treated wounds and how that treatment could be improved. He put his postdoctoral fellow Cynthia Ghobril and graduate student Kristie Charoen, along with two colleagues, to work on the problem. With support from the National Institutes of Health the group designed the hydrogel and tested it to ensure that it was safe and non-toxic.

According to Dwortzan, the hydrogel is applied from a double-barreled syringe. Each barrel contains a different compound. When the two compounds meet they combine within seconds to form a honeycomb-like network of cross-linked chemical bonds. The product absorbs fluid on the surface, has the consistency of gelatin and sticks like an adhesive, remaining intact for several days. To remove it, doctors add a solution of cysteine methyl ester, which is a derivative of a natural amino acid, to the hydrogel which causes its cross-linked bonds to break apart. The gel dissolves within 30 minutes.

Dwortzen writes that, over the next six months, with funding from the Wallace H. Coulter Foundation, the team plans to evaluate the hydrogel for the treatment of burns.