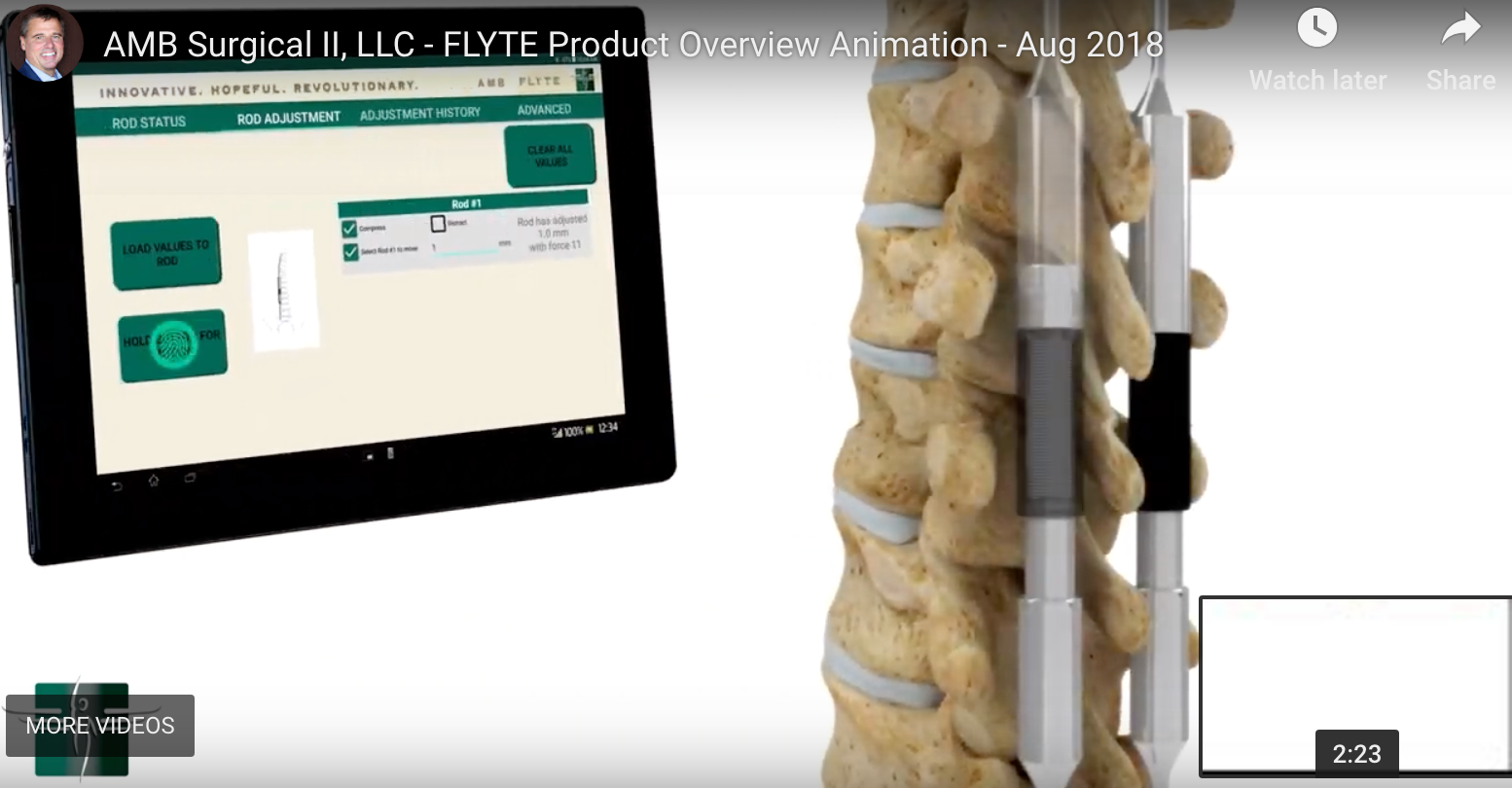 written by Medtech Strategists by Colin Miller, shared on LinkedIn

﻿A child with spinal deformity may undergo as many as 10 surgeries in a 5- to 8-year time frame. AMB Surgical aims to spare them that ordeal. Its Smart Automated Growing Rod incorporates sensors that wirelessly communicate with a paired software application to provide doctors with real-time feedback from the device so they can make strategic, painless adjustments to the rod’s length remotely.

When health issues have a personal impact, solutions can come from unexpected places. By the time Dan Sands, CEO of AMB Surgical II LLC, met the start-up’s original co-founders Casel Burnett and Tyson Ross, the two engineers each had well-established careers outside of healthcare or medtech. Burnett, who held a senior position at Toyota at the time, was inspired and emboldened by his daughter Ashley (for whom the company is named) and her diagnosis of early onset scoliosis. He called on Ross, with whom he had previously collaborated in the automotive field early on, before Ross joined the Air Force Research Laboratory.

FLYTE promises a minimally- invasive procedure for scoliosis with an increased degree of precision.

After Ashley’s diagnosis in 2008, Burnett found himself looking down the road at multiple expensive and fairly high-risk surgeries, desperate for a better alternative. Though bracing and casting can sometimes work to correct spinal deformity, the former comes with significant challenges with compliance. (See “Wellinks: Applying Connected Health to Improve the Efficacy of Scoliosis Braces,” MedTech Strategist, December 2017.) Casting has its drawbacks as well; it can be intrusive and uncomfortable. These methods are also less than viable for impacting a solid, inflexible curvature. Despite having no medical background, Burnett and Ross devised an alpha prototype of the technology that would serve as their fledgling company’s basis, consulting with orthopedic surgeons along the way.

Unfortunately, the concept may have been a bit ahead of its time, intimidating potential investors with the prospect of an electromechanical, motor-driven device and power source that could be controlled remotely by software. With no established predicate device on the market, no real network in the medical technology field, and the unfavorable economic climate in the wake of the 2008 recession, raising capital for AMB Surgical proved an insurmountable challenge for the time being.

After stagnating somewhat for several years while Ross pursued his doctorate, the 2016 acquisition of Ellipse Technologies by NuVasive Inc. for $380 million was just the shift in the wind that the founders needed to take a fresh approach to the company.

For the relaunch of the company as AMB Surgical II, they brought in Sands, who has spent 27 years in the health industry, as CEO, in hopes that his extensive experience with early stage start-ups and considerable connections in the orthopedic space would help them achieve the market penetration they had sought for years. Having seen five other companies through development, Sands was immediately able to support the organizational structure of AMB Surgical II. After about a year of filled with meetings with investor groups and orthopedic experts, the previously self-funded company secured its first round of outside funding, totaling $1 million.

The cornerstone of AMB Surgical II’s patented FLYTE platform is its Smart Automated Growing Rod (SAGR) technology. It consists of a telescoping rod with sensors that wirelessly communicate with a paired software application to provide doctors with real-time feedback from the device in order to make strategic, painless adjustments to the rod’s length remotely. Designed to bypass the complications that place juvenile spinal surgery patients at risk, including screw misplacement, pseudarthrosis, infection, and nerve damage, FLYTE promises a minimally-invasive procedure that will give orthopedic surgeons an increased degree of precision in both the data they receive from the device and the corresponding movements they are able to achieve. This advantage should all but eliminate the need for multiple surgeries, of which some patients must undergo as many as 10 in a five- to-eight year timeframe.

Once the rod is placed against the spine at the submuscular level, caudal and cephalad screws are installed to maintain its position. Sometimes, two rods are used to correct a curvature, with one distracting and the other compressing to straighten the spine. These adjustments can be made simultaneously or independently of one another, using a residual amount of power that is intended to be depleted after a move, a safety measure that ensures that no distraction or compression will occur outside of the surgeon’s control.

A wearable vest charges the device wirelessly in the office during visits and eventually, it will be sent home with the patient to enable fully remote software-device interaction. According to Sands, the simplicity and lower cost methodology deployed by AMB Surgical II will lead to more frequent and controlled adjustments, thereby dramatically improving patient outcomes over time.

With over 100,000 cases of early onset scoliosis occurring annually in the US and a known link to heart and lung issues later in life, the need for a product like FLYTE is as strong now as it has ever been. (See also “The Challenge of Pediatric Device Development,” this issue.) Though the spine is FLYTE’s primary application, the platform can also improve existing techniques for complex pediatric deformity correction such as dynamic external fixation, or X-Fix, and long bone lengthening for intramedullary nail applications.

Sands anticipates a roughly two- year process that will encompass animal studies to prove efficacy and FDA submission of the FLYTE system using NuVasive’s MAGEC rod as a predicate. (See “As NuVasive Moves into Deformity, EVP Matt Link Talks about its Innovation Strategy,” MedTech Strategist, October 2017.) Though the concepts are similar, certain key features distinguish AMB Surgical II’s solution from NuVasive’s, including onboard pressure sensors that show surgeons force exerted over an incremental distance being compressed or distracted and a manual override function that would avoid needing to replace the entire device in the off chance that any movement is not executed as planned. Both of these elements serve to improve the patient experience, shaving away otherwise-standard X-rays, anesthesia, and regular office visits.

“The compelling nature of our IP probably puts us in a better position than the traditional types of technology that you see coming out in orthopedics,” says Sands, with the confidence of someone who has seen over 20 unique device concepts through to commercialization. Currently seeking $11 million to fund the next stage of AMB Surgical II’s activities, Sands’ longer-term goal for the company’s device is self-automation; a rod that initiates adjustments on its own using interpreted data from its sensors.

When bracing is an ineffective therapy for early onset scoliosis, spinal surgery is still
the leading treatment option. Surgeons risk a range of complications
in a developmentally critical anatomical region, and patients must often undergo multiple surgeries over a period of years in order to correct their spinal curvature.