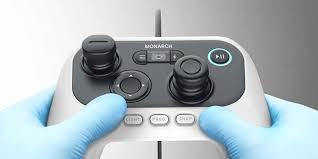 Johnson & Johnson, the world’s largest maker of health-care products, is pursuing an acquisition of Auris Health Inc. in a deal that would bring it cutting-edge surgical robotics technology, people with knowledge of the matter said.

J&J is seeking to purchase Auris at a premium to the valuation from its latest funding round, according to the people, who asked not to be identified because the information is private. That financing valued the Redwood City, California-based company at about $2 billion, one person said.

The closely held firm, led by industry veteran Fred Moll, has developed robotic surgical scopes operated with a handheld device similar to a video game controller. The flexible tubes are steered into a patient’s lungs, where they can be used to identify cancerous tumors.

Auris itself has raised more than $700 million from investors, including the latest $220 million equity financing round led by Partner Fund Management that was announced in November. Lux Capital, Viking Global Investors and billionaire Peter Thiel’s Mithril Capital Management are also among its backers.

No final agreements have been reached, and there’s no certainty the deliberations will lead to a sale of Auris, the people said. Representatives for J&J and Auris declined to comment.

Medical companies around the world, including U.K.-based Digital Surgery, are racing to develop technologies that make surgeries safer and less invasive. Auris and a subsidiary of J&J’s medical devices business entered a partnership in May last year to develop integrated systems for robotic control, navigation, and application of microwave ablation via bronchoscopes.

In 2015, J&J partnered with Alphabet Inc.’s medical arm Verily Life Sciences to form Verb Surgical Inc., a joint venture to develop the next generation of robotic-assisted tools for surgeons.

“An acquisition of Auris by J&J could be seen as a hedge by J&J on the JNJ/Google Verb partnership, which is also developing a surgical robotic system,” Larry Biegelsen, an analyst with Wells Fargo, wrote in a note to clients Wednesday.

J&J warned analysts this week it expects growth to slow or halt this year. The health-care giant also faces the threat of ballooning liabilities from thousands of lawsuits in which plaintiffs have claimed they were harmed by the company’s artificial hips and vaginal reconstructive mesh, or given cancer by its talc-based baby powder.

The company’s drug business is also facing pressure from the ongoing debate about the price for prescriptions in the U.S. and the prospect of increased generic competition as some of its biggest products lose patent protection.

— With assistance by Lizette Chapman, and Ari Altstedter(Updates with analyst comment in ninth paragraph.)