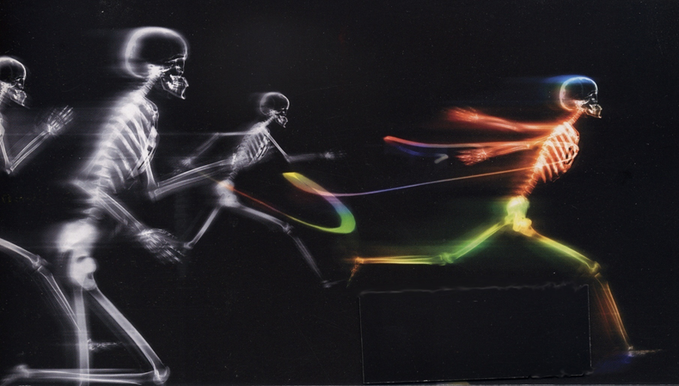 Let’s talk about another killer app for orthopedic companies, SPEED. I have already written about Risk and Iteration. Let me share how startups use speed to win, and how your company can use speed to win.

Successful orthopedic startups use SPEED as a strategic weapon against the incumbents. Startups leverage speed to win even though they have few resources.  Speed enabled Danek, NuVasive and Arthrex to come out of nowhere to totally dominate categories in orthopedics within a few years. BTW, the NuVasive mascot is the cheetah.

You see…  SPEED is the elusive asset that is out-of-reach for the large companies.

No matter how hard an established ortho company tries to create a culture of speed, other factors won’t let it happen, because they are bogged down with existing product lines, inventory, market reputation, and distribution models.  Simply going through the process of determining how a new product or technology will impact their existing businesses will take Big Ortho more time than it takes for the Startup Ortho to do it.

While the Big Ortho employees are stuck in meetings, startups make more progress each day, each week and each month. They finalize the designs faster. They complete the testing faster. They achieve regulatory clearance faster. They finish the FIM surgeries faster. They even execute sales faster.

This constant acceleration has a compounding effect (like compound interest with money) that creates uncanny results within a few years.

How can speed be a weapon?

When we are talking about speed, the resulting output is innovation and operational speed:

But it even goes beyond this.  Speed is not just doing business faster. Speed actually becomes a currency for startups.  Speed has the real equivalence of cash, productivity and innovation.

Here are a few benefits of speed that successful startups enjoy.

If your startup can achieve more progress in less time, you get a triple benefit. You burn less cash each month, you reach sales faster and you build valuation faster. An overlooked advantage to speed is that it helps to leverage you cash on hand. If a new product can be launched six months earlier, then the resulting sales come in without the additional burden of six months of payroll and operating expenses.

If your startup can generate and execute design concepts rapidly, you can outrun your competition, even if you are starting at the same point in time. Then with the compounding speed of repeated innovation, you can out-innovate everyone. The gap between your innovation, and that of your competitors, will continue to grow. Remember that most products iterate their success based on real customer feedback and usage. No first launch is ever perfect. The key is fast innovation plus fast innovation feedback.

If a new product can be launched 12 months earlier, you can beat the competition to market. You also start to get feedback and can work on the Gen 2 design before the competition has even launched. The sooner you get your product in your surgeons’ hands the sooner you can refine the design. Not to mention that being first to market can have permanent impact.  Only one company can be first. If you are first to market, often you can set the price and service that all followers will be compared to.

Speed clarifies what is important, what is critical, and what is in the way.  If you want to achieve more progress in less time, you have to simplify your systems, streamline decision making and feedback loops. Speed forces a company to streamline, to round off the rough corners, or anything that creates friction in the business.  Carry fewer ideas, simplify pricing, simplify contracts, simplify communication, simplify the Org structure, simplify hiring, etc.

If you move at super-fast pace, eventually your would be competitors will capitulate and say “Never mind, we cannot keep up with X in this area. Let’s focus in another area.” You win by eliminating potential competition.

At Ellipse Technologies we were chasing S+N in the product development of the remote control limb lengthening nail. I nailed a giant banner to the wall, “Beat S+N”. Using our speed culture, we flew right past them. We froze the design in 6 months, whereas S+N (after 7 years and counting as of this writing) is still thinking about their remote control nail project. I personally believe that our speed culture helped to demoralize S+N product development efforts.

How to inject a culture of speed into your company?

Speed culture comes from the top.  The speed culture is basically a mind-set to move fast and experiment without any wasted motion. The CEO must show that “no one gets shot” if they make a mistake by moving fast. The CEO has to publicly value speed over other tradeoffs such as accuracy or completeness. Remember that the enemy of best is better. When you get to better, just GO!

Think short-term incremental goals that you can touch and feel, not future milestone goals.  The key hack here is to set the time goal, not the output goal.  Instead of asking, “When will the product be on the shelf?” ask, “What can you do with your team in 3 months? in a month? in a week?”

At my first startup, we had an idea for a complex mechanical implant mechanism.  My Design Engineer showed me what he had designed on CAD and proudly told me that we would have a Titanium prototype in 6 weeks (a real implant). I told him I wanted a plastic prototype in my hand tomorrow. The next day we determined that the design wouldn’t work. I was very pleased. The company had just saved 5 weeks and 6 days and $1,000 chasing a bad design.  If needed, we could do this 42 times in a row in 6 weeks.

If you want to hire faster, you need less wasted motion, not more information.  The best feedback about a candidate is fresh feedback. At my last startup we made the decision about the candidate at 5:00pm each day just after the candidate left the building. All interviewees, including the CEO, went into the conference room and at the count of 1, 2, 3 gave a thumbs-up, thumbs-down or something in the middle. This came to be called “the Gladiator meeting” for obvious reasons. There were only three outcomes.

These were 15-minute hiring meetings. No wasted motion.

Stories of people sleeping under their desks in orthopedic startups are myth (this is silicon valley lore), however, it does happen in short spurts.

Ortho startups must have the ability to sprint from time to time. These sprints are needed when there is a big problem that is either an imminent major loss of time or a potentially fatal issue to the company. On these sprints most of the organization focuses on a single key problem.  This is commonly called a “all hands on deck”.  These sprints can last for a few days or a few weeks. The big problem can be just about anything – the product has a technical issue, the FDA threw back a submission with tough questions, first ever regulatory audit, lost key supplier, new competitor pops up in your space, an unexpected sales dip, etc.

At my last startup, we were planning on moving to a new building and did not want to waste time to get a new cleanroom approved. So the CEO called for a 4-day sprint. 20 volunteers disassembled the existing cleanroom, reassembled it in the new building, carried out the requisite bug tests for 2 days, then disassembled it and moved it back to the existing facility. Cost was 4 days and a lot of pizza and beer and our cleanroom was pre-approved before we brought it over to the new building.

The point is that you startup must have the culture to sprint when necessary.

This may be the biggest one.  Startups with speed cultures remove all of the friction to enable speed. At all cost, they avoid politics, focus groups, usability studies, QA, endless debates, boards of directors, business development deals, budgeting processes, and marketing plans.

In every startup I worked in, all employees had skin in the game. From the CEO to the admin, everyone was awarded stock options or bought into stock through their paychecks. When employees own a piece of the boat they tend to row faster and all row in the same direction.