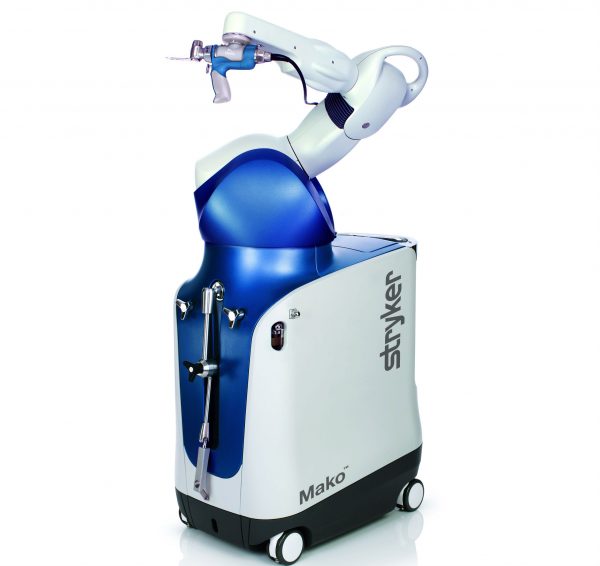 The robots are coming. Don’t be afraid. These machines are changing medicine for the better … one hip and knee replacement at a time.

This exciting technology, which I’ll tell you about in a moment, will only be more life-changing when lightning-fast 5G networks get rolled out to the masses.

Stryker Corp. used to fly under the radar. The Michigan-based company had a good business making orthopedics, medical instruments and supplies. Then managers pushed into robotics. Business took off.

It’s no surprise. Stryker is onto something big. As it always has been. It has a long history of creating revolutionary tools in the healthcare market.

Innovation and vision are in the corporate DNA. As a student at the University of Michigan in 1939, Homer Stryker invented the walking heel, a rubber insert for hard plaster casts. Earlier he developed the Wedge Turning Frame, a special gurney that allowed caregivers to turn patients with serious back injuries.Today In: Money

By the time Stryker was a practicing surgeon in Kalamazoo, he had a research lab in the basement and side business designing tools to make his day job easier. That business was incorporated in 1946. More practical innovations followed.

The company patented an oscillating saw in 1947 that could cut through casts without damaging the skin and tissue beneath. The original turning frame evolved into the Circ-O-Lectric in 1958. Sales exploded to $1 million.

By 2010, a series of forward-looking acquisitions made Stryker a major player in orthopedic implants, medical devices, surgical products and neurotechnology. Revenues ballooned to $7.3 billion.

The buyouts gave Stryker vertical integration in orthopedics. The company made the implants, developed the software and built the hardware surgeons used to install the devices.

The strategy was prescient. Knees and hips are the largest joints in the human body. They support body weight and, as aging Americans are becoming more obese, the number of chronic problems is on the rise.

According to the American Academy of Orthopedic Surgeons, one million hip and knee replacements were performed in 2013 alone. Subsequent research completed in 2018 predicted the number of procedures will grow to 1.8 million annually by 2030, as the number of younger patients rise.

The Florida Orthopedic Institute noted that Mako robotic systems have been used more than 50,000 times for hip and knee replacements since 2006.

The procedure for hip and knee replacement involves a CT scan, a patient specific 3D model, and a pre-plan surgery strategy. From this data and cameras mounted on the arm, the Mako system maps the procedures. The robot knows exactly where the bone is at every point in time during surgery.

Dr. Kenneth Gustke, a surgeon at Florida Orthopedic, explained in a thorough demonstration video that the robot performs all alignment once the physician activates the trigger. Cuts are accurate within one millimeter.

The Mako system gives surgeons the flexibility to customize and fit the implants, then reestablish alignment with high precision. The result is safer surgeries with better outcomes for patients.

At Stryker, those better outcomes are leading to market share gains and better utilization rates for its sought-after robots.

The company sold 44 robots globally during the quarter, with 35 units sold in the United States. This is up from sales of 39 and 29 units, respectively, a year ago.

Overall, the company had organic sales growth of 8.5%. And all three of its major operating divisions — Orthopedics, MedSurg and Neurotechnology — reported increases.

In July, the company reported $3.6 billion in sales, a 9.9% increase versus the previous year. And Stryker generated $827 million of free cash flow.

Strong numbers have made the stock are impressive performer. Shares have risen 36.5% in 2019. The stock currently trades at 23.7x for earnings and 5.5x sales. The market capitalization is 79.4 billion.

While these financial metrics may seem expensive, keep in mind that Stryker’s organic growth far exceeds its peers. The company is in a very strong competitive position in a part of the healthcare marketplace far removed trade tensions or domestic political debates. Managers put the company in position to grab market share in the race to replace hips and knees.